Edit: @Oddfollow, not Oddfellow. Summary: A stalker on Twitter? The formation of the @stalkerwarning account (now @oddfollow) and the Breasts of Twitter. Twitter is an unusual community in that it has no clear moderation (police) and no clear Code of Conduct, due to being a fully gated community.

I received a private warning yesterday on Twitter that @sluff was only following women and that I was one of the women. I wasn’t following him back. So I had a look at his following/followed list (“friends” in Facebook, without the reciprocal arrangement)

Hmmm following 311, but not a high percentage are following him back. That means he sees what we write, but we don’t see his stuff. But here’s a small taste of @sluff’s wall: 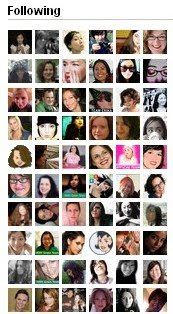 All women on his wall- amusingly @s (3rd line from the bottom, the cartoon) is a bot, an email assistant, that has only ever updated twice, the last 3 months ago. But hey! looks girly enough. Now I couldn’t find a “gender” field on Twitter profiles so I assume he is just looking and clicking. But what’s his intention? Anyway, I blocked him, so I am no longer on his wall.

Yes, your community absolutely needs a ‘foes’ list as well as a ‘friends‘ list. If you are all politically correct and squeamish – heh – call it an ignore, or a block list, but it cuts down the host based moderation when the member is able to self-moderate or guard the gates into their own walled garden of information.

Which brings me to another point: Twitter offers no moderators. This is unusual in social networks- an instant, live chat channel has a #op, a virtual world has a GM (game moderator), a forum has an Admin. So what to do??????

Well, I received the warning from KJ (I’ll name/link if she gives me permission) in a private Twitter message, called a DM (direct message). PMs or DMs are internal emails (internal to the social networking site) and can allow the community to swarm into smaller private groups for better or for worse.

I’m not shy nor easily cowed on social networks, and believe that open discussion is a powerful medium, so I published it publicly to my 685 Twitter followers – hoping they would pass on the message. I didn’t say that @sluff was up to no good. Just that he was following only women and that I had chosen to block him.

This encouraged PC (again, will publish details if she gives permission) and KJ to start a new Twitter group called @stalkerwarning. This name was not popular so it became @oddfollow. (I’m also one of the ‘Admins‘).

If you don’t give the community a code of conduct, they will define their own. *shrugs* that works on Twitter and some communities, and causes problems on others. Remember that community is about shared (or not) values.

We’ve expanded the warning system to include spammers. Spread the word!

No doubt one of the TwitterBot developers will step in and support us, i.e. submit a name, and it get’s auto- tweeted to all subscribers/followers.

This is perhaps a fine point that needs to be developed in detail but because communities are about engagement and not rules, moderators ‘know‘ or don’t know the ‘perpetrator’ and make rulings accordingly. A moderator that cares about the community will take time to examine the ‘intent’ of the action. Has this person been well behaved for two years, and can be trusted when they say their account was ‘hacked’ by school friends or left open to abuse by a younger and more immature relative? Is the members behaviour acceptable within the scope of their personality? You’d be amazed at what some communities will put up with from their most vocal, ardent members, but would stomp on from a newbie. In the absence of host-moderators, the member will make their own assessment of acceptable/unacceptable behaviour.

But perhaps the most amazing question is why us women would get upset with a silent potential stalker like @sluff and yet be amused and somewhat charmed by @FoulBastard who runs the Fouly’s Angels – Breasts of Twitter: 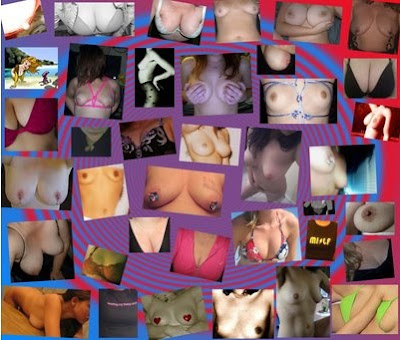 No, I’m not on this wall. Ain’t gonna happen.

I think it’s because Fouly is engaged with both men and women in his Twitter subcommunity, he genuinely gets involved with social consciousness discussions such as pea day and he’s … well he’s just a bloke. A politically incorrect one, but still popular with the ladies. Not even much of a bad boy, online, and you know how much we love those. Just not too bad, right?

His intentions are clear – he likes a certain part of a woman’s anatomy – and most of us either roll our eyes and enjoy the rest of his wit, or we just don’t follow him. As for the other case:we simply don’t trust @sluff’s intentions. 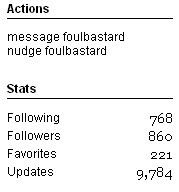 @foulbastard has more followers than he is following, unlike @sluff – one of the classic ways a community will make an assessment on the identity/reputation and trust of it’s members, and attribute purpose to it’s members actions.

There’s a difference between being a (potentially) stalking creep and a typical one track mind male who openly loves women. *laughs* and I love the fact that another one of my Twitter friends excitedly emailed me to say she was on his “Breasts of Twitter”. No I don’t think women are capricious, I just think we see the grey instead of black and white.

All comments welcome: both the politically correct and the outrageously naughty. And no, I’m not concerned about discussing such things in an open forum.