Click on the pictures to see them clearer.
Well call me every kinda fool but do y’think there’s some kind of election going on here? Look at the flags! 28, 143 Coconut Grove, Second Life if you want to visit. For Tom Rooney, elect to the Congress:

Tom Rooney for Gun Control? I think not! 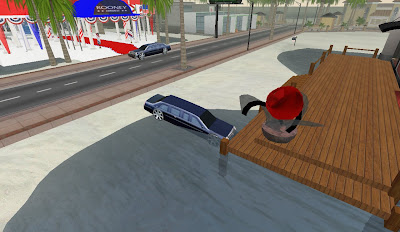 I bought that limousine you can see in the top picture. But clearly I can drive in Second Life about as good as I drive in First Life. *fed up* Anywho, any of our pollies wasting tax payers money on a flag-infested, ostentatious location complete with ’em in military uniform and shooting at things? All for the three thousand Australians who play Second Life? No? Thought as much.
Now I have to slip off, change into my alter-ego Nikita Ninja and find my comrades. We gotta pay Coconut Grove a visit. Heh. From Second Life Liberation Army:

The Second Life Liberation Army (SLLA) was formed as the ‘in-world’ military wing of a national liberation movement within Second Life. The movement contends that political rights should be established within Second Life immediately. As Linden Labs is functioning as an authoritarian government the only appropriate response is to fight.

The SLLA will conduct a political and military campaign to ensure its demands are met and avatar rights are established.

The SLLA’s demands are simple:

The establishment of basic political ‘rights’ for avatars within Second Life

The SLLA will not seek to harm the normal operation of the world.

They, as all good little cyber-terrorists do, have a blogspot blog:

I forgot, you have to be a member to see it. Ask Dave LifeKludger. 😛 Viva La Revolution! Viva Le Avatars!

I don’t know what to say… It’s an open invitation to predators and an activity Pope John XIII Regional High School in Sparta will no longer tolerate, Rev. Kieran McHugh told a packed assembly of 900 high school students two weeks ago.Effective immediately, and over student complaints, the teens were told to dismantle their Myspace.com…

I’m such a slack lazy sloth. Some handsome chap from Mobile Monday Sydney asked me to email him about talking on a panel re: Mobile phones and social networks. I meant to do it – OOPS! too late! It’s on tonight: SPECIAL LATE GUEST MySpace Australia‘s Business Development Manager, Nick Love, will be joining our…

EITHER IN COMMENTS or email them to me – lpapworth (at) gmail.com if you are shy 🙂 I have to get some testimonials together. Like, how I saved the world and stopped ladders in pantyhose without blinking. Or something. So if you are up for it, and have worked with me, sat in a workshop,…

Just read this about Australian TV and newspapers  in the New Zealand Herald On Sunday… “This week the Seven Network confirmed it had cut the value of its 47 per cent holding in the Seven Media Group from A$793.9 million to zero, following Packer’s similar valuation of PBL Media when he dumped his residual holding…