I’d like to move, but really can’t find anything sympatico. Then I found this blog post on loobylu and loved every home in it. Complete post cos it’s just too beautiful to decide on just one image:

I think one day I would like to build a house. It’s always been a little bit of a fantasy for me.

I’m sure it all started with a children’s book. Early dream house inspiration:

Surely this was inspired by or inspired this bizarre modern home from 1968 which is not too different really.

Designed by Antti Lovag, photographed by Ken Sparkes, via Paleo-future .

And today on Ohdeedoh there was a post about this beautiful Hobbit-like low impact house built into a hillside in Wales.

As the children grew up and needed more space you could so easily just add on a new wing, Barbapapa style. Honestly, I would have a problem with the bugs. Perhaps I would get used to it, but it reminds me of some of the houses we visited on a holiday to Nimbin when we were small. (speaking of Nimbin, here’s another cool house)

Good stuff for the imagination anyway.

Loobylu is a woman’s blog – Aussie – and she’s won a few awards. 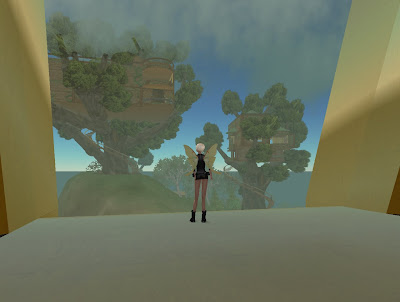 I also found my perfect tree house home at H.P. Lovecraft island in Second Life. I really should be made of pixels you know. Tron anyone?

Hmm you know, this guy is me in man-drag…… except I don’t yell as much, I giggle more, I’m prettier etc. Rather taken with the annotations and popups. More my collaborative style than the traditional locked down content on YouTube. Gary Vaynerchuk’s original “Do you know why? R.O.I.” post. You might like to read more…

Do online communities overreact? Qantas Airways published a photo of two fans with blacked out faces and wigs on, causing a controversy on Twitter, in spite of Radike Samo not minding at all.  My view is that there are deeper issues here -Qantas brand voice on social media is not their traditional marketing voice. What…

Design our Pepsican but only if you are an American. The rest of the world doesn’t drink Pepsi? Hmmm why are some competitions at least partly global and the rest not? No writing naughty things. Unless you download the EPS file I guess. No community. You can see what other users have created but you…

NOTE: I just deleted a tonne of contacts on LinkedIn – if one of ’em is you, yell at me. I probably did it by mistake. I was trying to get rid of nasty recruitment spammers. I’m down from over 100 to just 55. And more to delete…. I should really sit back and polish…

Hey, if you can figure out a login/password, lemme know? But ssshhhh! 🙂 Oh y’know it’s funny to find out the CIA are using social media for intellipedia: Intellipedia was founded in April 2006 [1] and consists of three wikis running on JWICS, SIPRNet, and Intelink-U. They are used by individuals with appropriate clearances from…