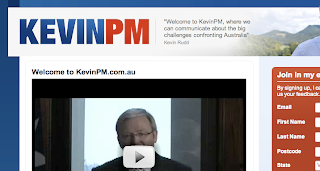 For a second, I thought he was self gagging a protest on Minister for No-Broadband Stephen Conroy’s ISP filter plan #nocleanfeed.
KevinPM is not Web 2.0. Web 2.0 is about social media. I’ts not about using social networks to push agency media, nor is it one way “PM to voter”. Web 2.0 is interaction PM to voter to PM, or at least voter to voter.
Now, I don’t think that Kevin Rudd should sit on Twitter (KevinRuddPM) all day responding to a handful of voters chatting. He has better things to do. Like run a country. But a designated Senior PR/Community Manager might be just the thing. Make sure it’s transparent though – faking a Kevin tweet will be anti-marketing and anti-PR in this case. And give Australians a place to natter on about the state of the economy, politics, green things, what have you. Why not have the village square on a gov branded microcommunity site?
Back to Kevin09 KevinPM – using YouTube as a broadcast, passive medium. A feedback form. An email list. Web 1.0 in all it’s dying glory. Kayt from DT Digital project managed it but whoever is advising Kevin Rudd office on engagement with voters should’ve briefed them better. This is not the time to phaff around with faux engagement. Time to step up to real opportunities to listen and respond to the people.
Green screening is where you leave a wall or screen green so that editors (citizen or professional) can add in a background. Newsreaders do it with a London Big Ben picture, in movies its to add in CGI Monsters.

So was McCain’s green screen deliberate? Or accidental? Here’s one:

So, without having to reply personally to the tweets, facebook wall questions, myspace postings and youtube rantings of every single American, McCain was able to give them something interactive to play with. Didn’t win him the election though, did it?